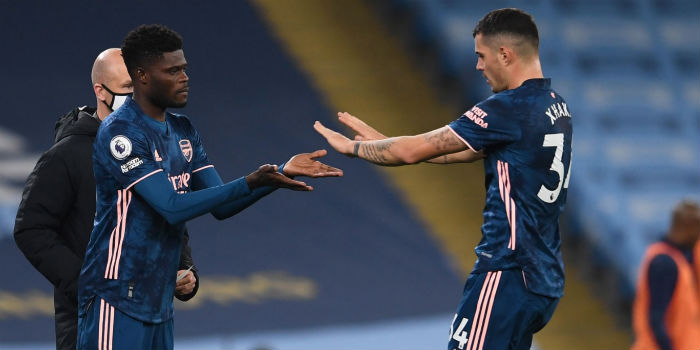 Arsenal midfielder Granit Xhaka has lamented over the persistent injury woes of Thomas Partey since his summer move to the club.

Last summer, the Ghana international moved from Atletico Madrid to the English Premier League outfit for a fee of 45 million pounds.

Unfortunately, his outstanding performance at Arsenal has not been consecutive with two major injury blows seeing him miss a number of matches.

When he is fit, Thomas Partey is usually paired with Granit Xhaka in the midfield of the Gunners.

For the Swiss, he believes the injuries to the Ghana star have been unfortunate because he brings a lot to the table when he is fit and playing.

“It is a shame we have not played a lot together because he has had two big injuries. But the games we have played together, I think he looks very good, very solid,” Xhaka told Arsenal Media on Wednesday.

He continued, “We are very good together, not only on the pitch but off it as well. He is a lovely guy, he is improving our team because you can see how much experience he has at this level, and this is good for my game as well.”

Fortunately for Arsenal, Thomas Partey returned to action on Thursday when they defeated Benfica 3-2 to qualify for the Round of 16 of the Uefa Europa League.