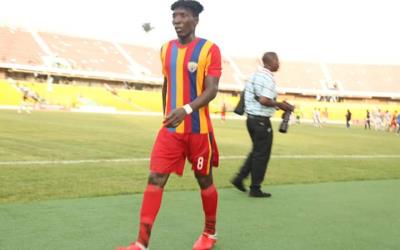 Accra Hearts of Oak have met Benjamin Afutu to negotiate his contract extension following his outstanding performance for the club so far this season.

Hearts of Oak have tried several times to extend the contract of Benjamin Afutu but negotiations failed due to a disagreement over a clause, leaving the player with only a few months remaining on his contract.

Prior to the start of the second half of the season, the versatile midfielder was said to have traveled to Azerbaijan to finalize a deal, but he subsequently rejoined his colleagues at the Pobiman training grounds.

The 25-year-old has been excellent form for Hearts in the second round, starting virtually all of their games and bringing stability and consistency to their midfield, scoring two goals against Elmina Sharks and most recently Berekum Chelsea.

Coach Samuel Boadu's league-leading side will meet regional rivals the Dade boys in a Ga-Matse derby on Sunday at the Accra Sports Stadium.