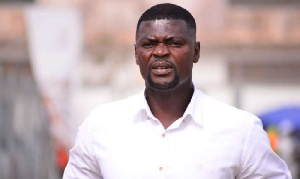 Head coach of Accra Hearts of Oak Samuel Boadu has expressed his side readiness to battle with any club globally.

Boadu, who joined the Phobians prior to the start of the second round of the Ghana Premier League has hit the ground running turning the club into a league title contender.

The rainbow boys are on top of the league table with 53 points and a better goal difference over sworn-rivals Asante Kotoko after 29 matches.

The club is also in contention to win the MTN FA Cup after securing a place in the round of 16 after beating Windy Professionals 4-1 on Sunday.

Speaking after the game, the former Medeama coach expressed his joy and said his side is ready face any club in the country and the world at large.

“Hearts of Oak’s team at the moment is ready for any club around the world” he said.

The rainbow boys will take on Legon Cities on Thursday in matchday 30 of the Ghana Premier League before the cliffhanger against Asante Kotoko on Sunday.