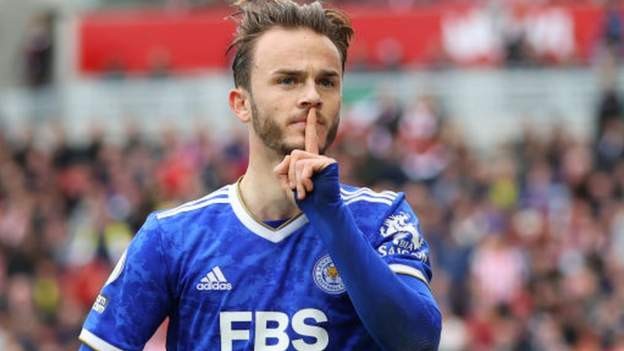 James Maddison's goal against Brentford was his first of the season

After being taken off at half time against Brighton on 19 September following a below-par performance, James Maddison went away and watched video clips of his best moments.

The Leicester midfielder, by his own admission, was out of form and low on confidence.

Maddison had not scored a goal since February and had not provided any assists for his team-mates this season.

But the disappointing display against the Seagulls prompted some self analysis to see how he could rediscover his best form.

The result has been a fine week for the England international, putting in an excellent performance in the 4-2 win against Manchester United, getting an assist in the 4-3 Europa League victory at Spartak Moscow and then scoring the match-winning goal on Sunday as Leicester beat Brentford 2-1.

"I have had to be my own biggest critic and look at where I was maybe going wrong," he told BBC Sport.

"It is just having that humbleness to look at myself. Thankfully I got a tap-in [against Brentford] and I won't score an easier one."

What's changed for Maddison?Maddison was taken off at half time against Brighton

It has been a difficult few months for Maddison.

As well as struggling to impact games as positively as he would have liked for Leicester, his form also saw him miss out on a place in Gareth Southgate's England squad for the European Championship in the summer.

As the 24-year-old continued to struggle at the start of the season, Rodgers took the decision to leave him out of his starting line-up for a six-game spell during September and October.

During that spell out, Maddison did extra work in training, analysed his own performances and spent more time with Leicester's sports scientists to see how he could rediscover his form.

"He is getting back to his level," Rodgers said after the Brentford win. "He worked so hard during the period he was taken out of the team and that was purely just to break the cycle he was in, be able to analyse his game.

"Huge credit to him, he has gone away and analysed himself and been honest with himself. He has worked so hard and we are starting to see the fruits of that."

'People who doubt me are the people who motivate me'

After scoring the winner against the Bees, Maddison cupped his ear in celebration.

He had found himself the focus of some boos by the home fans after being involved in a number of duels with Brentford's players.

Maddison said afterwards he is driven by criticism, and that was also the case during the period he struggled.

"After the Brighton game I assessed how I was doing at the time. I realised I was low on confidence so we went back to what made me the player I am.

"It kind of gave me a kick up the bum. Hopefully I can get back to my best."