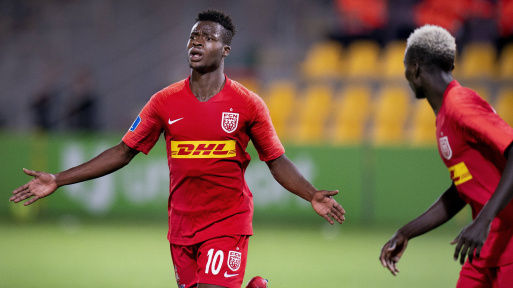 Kamaldeen Sulemana is a hot name out in Football Europe, and right now Ajax and Manchester United seem to be the most eager to get their hands on the FC Nordsjaelland player.

In this connection, ESPN has interviewed AGF Dutchman Kevin Diks, and he is very impressed with Sulemana.

In fact, he likes Sulemana better than Mohammed Kudus, who was sold from FC Nordsjælland to Ajax last summer.

"It's terribly beautiful to play against a good player. Sulemana is one of the greatest talents in the league. I've played against him four times. It was fun and a good challenge. He is a really good player,"

"He is very fast, explosive, he can turn the fights around, deliver well, and he knows how to utilize the spaces. Lately, he has also scored several goals. He chases goals and assists,"

Kamaldeen Sulemana is noted for 10 goals and 6 assists in 27 matches for FC Nordsjaelland this season.