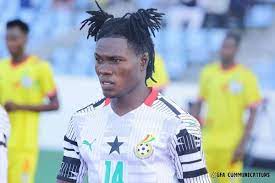 The Chief Executive Officer (CEO) of Karela United Elloeny Amande has confirmed interest from Hearts of Oak and Asante Kotoko for the transfer of Augustine Randolph.

The enterprising right-back, who enjoyed an amazing season with the Pride of the West in the domestic top-flight is being chased by several Premier League clubs.

The clubs are said to be in tug of war to sign the Black Galaxies player ahead of the 2022/23 season.

"The big two clubs in going to Africa this season have expressed interest in our right-back. But, we are not going to sell him," Amande told Asempa FM.

Randolph is currently in the camp of the Black Galaxies of Ghana. He was in action when Ghana defeated Benin 3-0 at the Cape Coast Stadium in the CHAN Qualifiers.