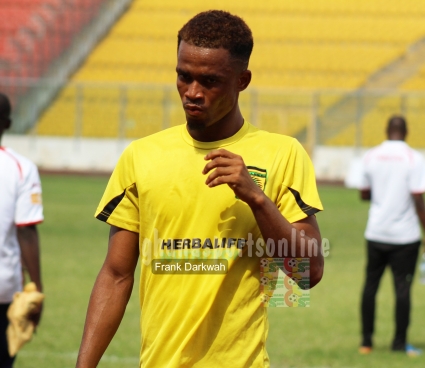 Kumasi Asante Kotoko central defender Richard Osei Agyeman is very confident of making it into the first XI after returning from an injury lay off.

The Porcupine Warriors are on a good run of form in the league with the meanest defence having conceded only 11 goals.

Richard Osei Agyeman who is returning from injury admits there is a lot of competition in the team but has vowed to fight for a place in team.

"Our team is strong so I haven’t given up on myself. I’m not playing as much as I did last season” he said. “I always train hard. I made it a point to prove myself anytime I get the chance. I’m happy I contributed to the win,” he told Asantekotokosc.com.

“There’s more ahead. I wanted the fans to see that I wasn’t being lackadaisical because of my lack of playing time. The team is dear to my heart. My time will come. That’s why I always tell my fans pray for me. All that matters is good health”.

Coach Steve Pollack has sole relied on defenders Awal Mohammed, Ahmed Adams and Awudu Nafiu for games since his arrival.