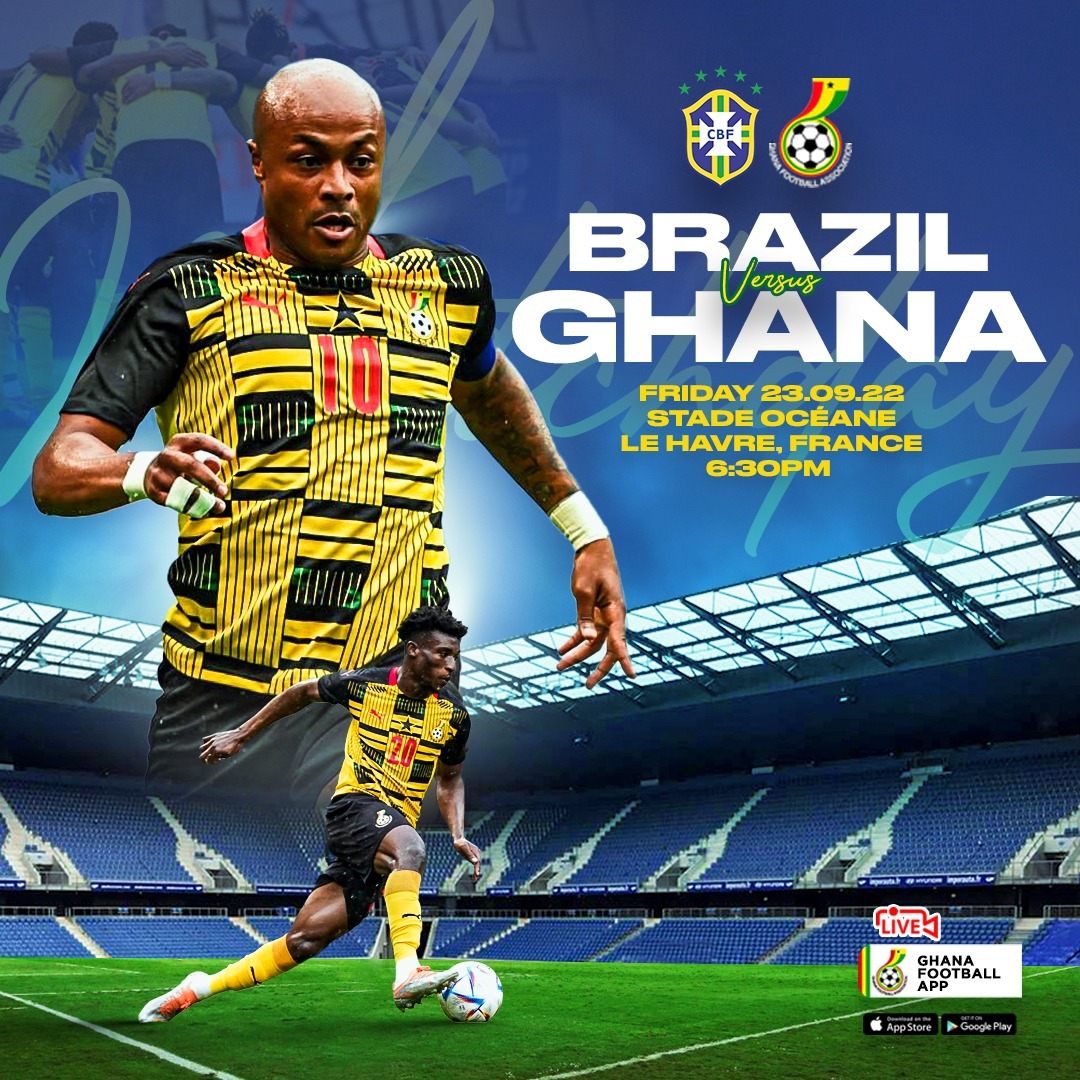 Good evening and welcome to the Live Text coverage of the international friendly match between Ghana and Brazil.

The Black Stars as part of preparations for the 2022 FIFA World Cup are locking horns with the Selecao today to give the technical team the chance to assess the strength and weaknesses of the team.

The friendly against Brazil is one of two matches that will be played in the September international break.

Later on Tuesday, September 27, Ghana will face off with Nicaragua in another friendly game before the FIFA international break comes to an end.

This evening, we focus on the clash between the Black Stars and their Brazil counterpart.

Ahead of kick-off at 18:30GMT at the Stade Oceane Le Harve, Coach Otto Addo has selected eleven strong players to do battle for his team.

All new players miss out on a starting eleven but will have the chance to come from the bench.

Meanwhile, the likes of Inaki Williams, Tariq Lamptey, Ransford Yeboah, and the others could be given a chance to impress in the second half.

Check out how the Brazil national team is lining up for the Ghana game;

We are just some 30 minutes away from kick-off. A while ago the Black Stars engaged in the usual pre-match singing mood.

Catch a glimpse below:

Bad news before kick off. Thomas Partey has sustained a slight injury and cannot feature in today's game. He will be replaced by Baba Iddrisu.

The two teams are out for the start of the game. Time for their respective national anthems.

2' Brazil threaten early in the game. Poor passing exposes Ghana at the back as Neymar tries to create something. The defense stands tall to avert danger.

3' Ghana break away against the run of play. Denis Odoi sends Afena-Gyan through but he lacks support. His shot is easily saved.

4' End-to-end action in Le Havre. Paqueta goes past Baba Ramham on the flanks. Finds Richarlison but his effort goes over the bar.

6' SO CLOSE' Neymar and Vinicius Jnr combine beautifully to split apart the defense of Ghana. Paqueta gets a chance but his effort misses the target by a few inches.

8' Corner kick. The first goes to Brazil. Goal!!!!! Marquinhos scores with a powerful header to give Brazil the lead.

11' Ghana finally comes forward in numbers. A good attacking play results in a corner. Unfortunately, it is wasted.

12' Mohammed Kudus goes into the books of the referee after a bad tackle on Neymar.

14' CHANCE': Vinicius Jnr threatens down the right again. He sends in an inviting cross but Richarlison's strike lacks direction.

18' Neymar charges at the Ghana defense and unleashes a shot that almost finds the back of the Ghana net. Exciting stuff.

20' Dominant Brazil deservedly in the lead after 20 minutes.

22' Neymar wins a free-kick in a very dangerous position. This could result in a goal. Casimero strikes from distance but Joseph Wollacott is alert and saves.

25' Jordan Ayew is teed by a carpet Mohammed Kudus pass. The attacker stays on the ball for far too long and is dispossessed.

27' Goal!! Richarlison punishes Ghana for another show of poor defending from the Black Stars. Brazil now leads by two goals.

30' We have done 30 minutes in Le Havre. Ghana currently trails by two goals.

32' Ghana seeing more of the ball in the last 10 minutes. Unfortunately, the team lacks quality in attack.

35' Brazil coil up to defend as the game opens up. The tempo of the game has slowed down after the second half.

37' Jordan Ayew tracks back to perform some defensive duties. He ends up winning a free kick for Ghana.

41' Joseph Wollacott makes a good save to deny Brazil the fourth goal.

We will be back with the second half updates after 15 minutes.

46’ We are back after the break for the second half of the action.

50’ Mohammed Salisu and Inaki Williams have been introduced by Ghana coach Otto Addo.

53’ It has been a better performance from the Black Stars in the second half.

60’ Brazil appear to be deliberating slowing down the pace of the game. It’s now raining in Le Havre with 30 minutes more to play in this contest.

64’ Brazil wins a free kick in a very good position. Neymar sends in a good cross but Joseph Wollacott comes out with strong hands to parry the ball away.

68’ Shouts for a Ghana corner but referee waves plays on. Will there be another goal?

70’ Tariq Lamptey gets his chance to mark his debut. Antoine Semenyo and Elisha Owusu also come on for Ghana.

73’ Another clash between Mohammed Kudus and Neymar. Referee this time only issues caution to the Ghana poster boy.

75’ Brazil is strongly back in the game as the team pushes for a fourth goal. So far no luck.

80’ we are into the last 10 minutes of the game. Can Ghana get an equalizer?

83’ Bad defending from Ghana again gives Neymar a chance to shoot. His effort, unfortunately, is over the bar.

87’ Great save from Joseph Wollacott. He denies Cunha what would have been a fourth goal for Brazil.

90’ We will do just three minutes of added time.

Full Time: That will be all in Le Havre. Brazil proved too strong for Ghana to hammer the Back Stars 3-0.

Ghana returns to action on Tuesday, September 27, for a second friendly this month in a game against Nicaragua.