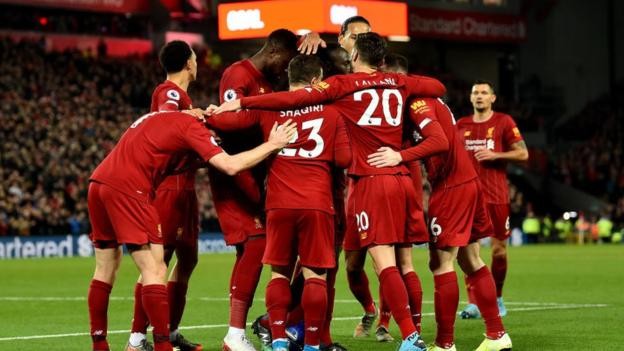 Liverpool pushed Everton manager Marco Silva closer to the sack and retained their eight-point lead at the top of the Premier League with a crushing win at Anfield which dropped the Toffees into the relegation zone.

Liverpool effectively won the game with four goals in the first half - Sadio Mane creating two early strikes for Divock Origi and the recalled Xherdan Shaqiri.

Michael Keane pulled one back for shambolic Everton but Liverpool were soon back in control when Origi controlled Dejan Lovren's pass for a brilliant third and Mane got the goal he deserved when he crowned a sweeping counter-attack from Trent Alexander-Arnold's inviting delivery.

Richarlison took advantage of Liverpool's own vulnerable defending to make it 4-2 on the stroke of half-time but in reality Everton were never seriously in contention at any point.

Both sides missed chances in the second half, with the brilliant Mane and Everton substitute Moise Kean culprits, but Liverpool completed the humiliation for Silva and his team with Georginio Wijnaldum's low shot for the fifth in the final minute of normal time.

The question now, as Everton lie in the bottom three, is how long the beleaguered Silva can survive, with Chelsea scheduled to visit Goodison Park on Saturday lunchtime.

Everton have lost three Premier League games in a row

Silva, 42, is suffering a slow, lingering demise as Everton manager - and this dismal showing is only likely to hasten his exit from Goodison Park.

This was a Liverpool side nowhere near full strength but the game was up for Silva and Everton once they were two down inside 17 minutes.

Silva's five-man defensive system was ripped to shreds, by Mane in particular, and it was no surprise when he removed defender Djibril Sidibe before half-time to introduce Brazilian attacker Bernard.

Everton were a team in chaos at times in the first half, with Sidibe, Mason Holgate, Tom Davies and Keane all arguing among themselves after Shaqiri's goal then Holgate and Lucas Digne also in animated discussion after Origi put Liverpool 3-1 up.

Director of football Marcel Brands cut a concerned figure at half-time, deep in discussion with fellow director Sasha Ryazantsev - and there will surely be more discussions among the Everton hierarchy post-match.

Everton did create some chances but never looked like ending a winless Anfield sequence stretching back to September 1999.

Silva now faces an uncertain future - and Everton face what increasingly looks like a relegation fight.

Dejan Lovren (Liverpool) wins a free kick in the defensive half.

Attempt missed. Moise Kean (Everton) right footed shot from outside the box is close, but misses to the left. Assisted by Alex Iwobi with a through ball.

Gylfi Sigurdsson (Everton) wins a free kick in the attacking half.

Offside, Everton. Lucas Digne tries a through ball, but Richarlison is caught offside.

Attempt missed. Sadio Mané (Liverpool) right footed shot from the centre of the box is close, but misses to the right. Assisted by Jordan Henderson with a through ball.

Mason Holgate (Everton) wins a free kick in the defensive half.

Attempt missed. Georginio Wijnaldum (Liverpool) header from the centre of the box is too high. Assisted by Xherdan Shaqiri with a cross following a set piece situation.

Offside, Everton. Morgan Schneiderlin tries a through ball, but Richarlison is caught offside.

Georginio Wijnaldum (Liverpool) wins a free kick in the defensive half.

Adam Lallana (Liverpool) wins a free kick in the defensive half.

Trent Alexander-Arnold (Liverpool) wins a free kick in the attacking half.

Attempt saved. Tom Davies (Everton) right footed shot from outside the box is saved in the bottom left corner.

Tom Davies (Everton) wins a free kick in the attacking half.

Georginio Wijnaldum (Liverpool) wins a free kick in the defensive half.

Attempt saved. Richarlison (Everton) header from the centre of the box is saved in the top centre of the goal. Assisted by Gylfi Sigurdsson with a cross.