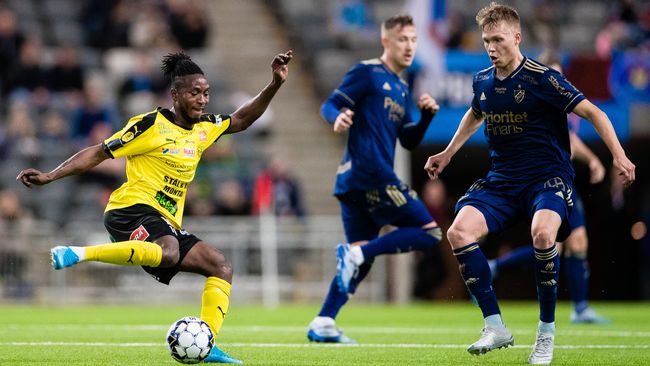 In front of a packed Eleda Stadium, Malmo FF had the chance to go up in the league against a Mjallby. Since this week's loss against FC Zenit, MFF has been forced to state new injuries to Bonke Innocent and Franz Brorsson, and they lined up with a very inexperienced bench.

In the third minute of the match, Mjallby created the first position of the match when Elias Andersson's left post found Viktor Gustafson in front of goal. The midfielder's nod forced Johan Dahlin to a qualified save. The home team's first goal chance came ten minutes later when Jo Inge Berget, Antonio Colak and Anders Christiansen zigzagged their way to Mjallby's penalty area, where the latter finished just outside the post.

Two minutes later, the guests took the lead. Kadir Hodzic fired a shot from close range that Dahlin could not hold, and the rebound ended up right in front of Mamudo Moro who had a simple thing to shave the ball into goal. 0-1 was not an unfair result at all. Mjallby celebrated great success on their left wing and MFF did not get the passing game right and was very careless.

In the 25th minute, Mjallby's MFF loan Amin Sarr won the duel against Anel Ahmedhodzic and finished from a dangerous surface, but Lasse Nielsen appeared with a saving foot and covered away to the corner. Malmo FF's first shot on goal came in the 40th minute when Colak finished from a narrow angle but got to see Carljohan Eriksson save the ball. Mjallby countered with a half-volley attempt from Moro that went close over Dahlin's crossbar.

Mjallby's fully fair half-time lead forced MFF to attack from the start after the break, which they also did. Within the first two minutes, Berget had shot outside and Colak over after a mistake from Eriksson in the Mjallby goal. Two minutes later, Colak managed to test Eriksson again, who got the ball this time.

Sergio Pena came close to leveling the score 58 minutes into the game, as he was set up with a through ball coming in from the left, but his shot hit the post. After 70 minutes, a mistake by the home side's left defense allowed Colak to get through. He outclassed the home side's keeper, adding another goal for the visitors. MFF lost momentum again and did not manage to create any hot goal chances towards the end.

Mjallby took a shocking victory and got on safe ground, while MFF is still three points away from the league lead. After the final signal, a tumult arose. Several players seemed a little dazed by the warm weather, and were repeatedly tricked by the clever and agile Anel Ahmedhodzic.