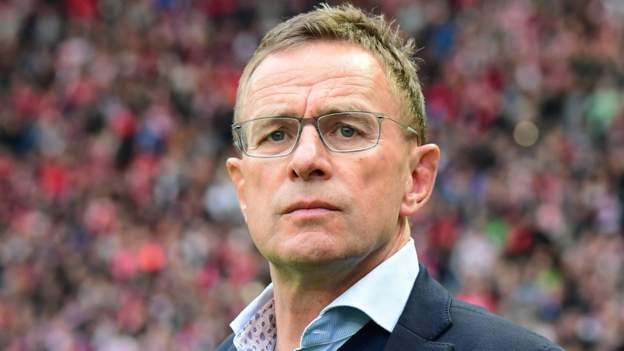 Rangnick led Schalke to the semi-finals of the Champions League

Manchester United have reached agreement with Lokomotiv Moscow for the Russian club's head of sports and development Ralf Rangnick to move to Old Trafford as interim manager.

The deal is not yet complete, as some contractual elements remain to be sorted out and there needs to be an application for a work permit.

However, it is now just a question of time before an official announcement that Rangnick will replace Ole Gunnar Solskjaer as manager for the remainder of the season.

The German, 63, will then stay on at the Old Trafford club for an additional two years in a consultancy role.

What can Man Utd expect from Rangnick?Football Daily Euro Leagues: Un-wreck it RalfRangnick move 'not good news for other teams' - Klopp

Rangnick will not be in place in time for United's game against Chelsea on Sunday when Michael Carrick will again be in temporary charge but he coul be in the dugout for Thursday's Premier League game at home to Arsenal.

Carrick took over the team after Solskjaer, who had been United manager since December 2018, was sacked following a 4-1 defeat by Watford on 20 November.

Carrick, Solskjaer's assistant, was in charge for the 2-0 win at Villarreal on Tuesday, a result that ensured they would finish top of their Champions League group.

Rangnick set Ulm on course to promotion to the Bundesliga for the first time before spells in charge of Stuttgart, Hannover, Hoffenheim, Schalke and RB Leipzig.

During the 2010-11 season he led Schalke to the semi-finals of the Champions League, where they lost 6-1 on aggregate to United, who were then beaten by Barcelona in the final.