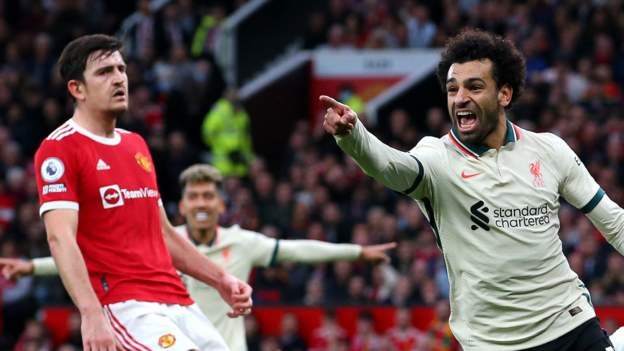 Liverpool humiliated Manchester United and their under-pressure manager Ole Gunnar Solskjaer as they handed out a thrashing in front of a stunned Old Trafford.

On a day of acute embarrassment for United and Solskjaer, 10 years and one day since they lost 6-1 at home to Manchester City, Liverpool emphasised the vast gulf between the sides in brutal fashion.

Mohamed Salah was predictably their main tormentor as the Egypt forward claimed a hat-trick, the first of which meant he had scored for the 10th successive game.

Solskjaer cut a dejected figure as he and his players faced the full fury of their own fans, especially at half time, after an insipid and disorganised performance.

The worrying signs were there for United after five minutes as Liverpool sliced them open when Salah set Naby Keita through to score at the Stretford End.

Diogo Jota then slid in at the back post unmarked to add a second from Trent Alexander-Arnold's delivery eight minutes later.

Liverpool were tearing United apart and the irresistible Salah got his first when he thumped the ball into the roof of the net from Keita's cross then beat David de Gea with a low effort to give Jurgen Klopp's side a four-goal half-time lead.

Many Manchester United fans left at the break and Solskjaer's response was to send Paul Pogba on for Mason Greenwood, but on a day when nothing went right for United even that mainly cosmetic move backfired horribly.

Salah raced on to Jordan Henderson's superb pass to complete his treble five minutes after the break then Pogba was sent off for a reckless lunge at Keita that saw Liverpool's midfielder taken off on a stretcher.

The rest was a formality as Liverpool cruised to victory in front of thousands of empty red seats deserted by the home supporters.

Liverpool were always going to come back stronger from the suffering of last season, when injuries and the worst run of home form in the club's history saw them drawn into a dogfight for a place in the Champions League.

They rallied superbly to finish third and carried that good form into this new campaign, with an ominous composure about Klopp's side from the first day.

With Virgil van Dijk back in defence and Salah playing at a level that suggests he is the world's best player, they are a ruthless machine and how United felt that power.

Bruno Fernandes actually missed a very good chance to put United ahead before Keita opened the scoring but once Liverpool got ahead, Solskjaer's side had no answer.

With Salah as the main weapon, they cut through United at will, reducing both their players and the crowd to nervous agitation every time they went forward.

Salah is in the form of his life and this United defence was an open invitation to him and Liverpool's range of attacking options.

In the last eight days alone, Liverpool have scored 13 goals in three games on their travels, taking in the 5-0 win at Watford and the 3-2 victory against Atletico Madrid in the Champions League.

This was Liverpool looking as formidable, confident and dangerous as they did when they won the title in 2019-20. It is shaping up to be a three-horse race along with Chelsea and Manchester City for the title and this was the performance of true thoroughbreds.

The only downside to their day was the injury to Keita, injured in a two-footed challenge by Pogba in what is a cruel blow to the midfielder given he has been showing the best form of his stop-start Liverpool career.

What now for Solskjaer?Manchester United have lost by a margin of five or more goals at Old Trafford without scoring themselves for the first time since a 5-0 defeat at home to Manchester City in 1955 under Matt Busby

Solskjaer was in defiant mood after United came from two goals down to beat Atalanta in the Champions League but there is a frailty and confusion about this team that means they will constantly fall short - and this inevitably puts further pressure on the manager.

There are defeats that carry greater significance than others and the sight of United chasing shadows five goals down while Solskjaer stood helplessly on the touchline being taunted for long periods by joyous Liverpool fans made this one of those days.

Any defeat to Liverpool is painful for United fans. When the defeat is as comprehensive as this one and in front of their own supporters, it is a day that will cut deeply to every part of Old Trafford.

It was a defensive shambles, with poor communication and lack of understanding about what the team is trying to do cruelly exposed by Liverpool. As a result, this game was effectively over within 13 minutes.

Solskjaer has praised the backing of United's fans and the Stretford End largely stuck with him and the team but there is no disguising the fact there were loud jeers at half time and by the time the final whistle sounded, huge sections of the stadium were deserted.

There was also a lack of discipline in the United performance, Cristiano Ronaldo perhaps fortunate to escape a red card for kicking out at Curtis Jones while he was on the floor then Pogba - presumably sent on to restore some slight semblance of order - getting one for his challenge on Keita.

United have been steadfast in their backing for Solskjaer but the shock waves of this result will have questions being asked more strongly than ever about his position by everyone from the club's hierarchy to their fans.

Attempt missed. Cristiano Ronaldo (Manchester United) left footed shot from the right side of the box misses to the right. Assisted by Scott McTominay with a headed pass.

Attempt blocked. Cristiano Ronaldo (Manchester United) left footed shot from the centre of the box is blocked. Assisted by Diogo Dalot with a cross.

Fred (Manchester United) wins a free kick in the defensive half.

Attempt blocked. Curtis Jones (Liverpool) left footed shot from the centre of the box is blocked. Assisted by Mohamed Salah with a through ball.

Diogo Jota (Liverpool) wins a free kick in the attacking half.

Aaron Wan-Bissaka (Manchester United) is shown the yellow card for a bad foul.

Diogo Jota (Liverpool) wins a free kick in the attacking half.

Attempt missed. Alex Oxlade-Chamberlain (Liverpool) left footed shot from outside the box is high and wide to the left. Assisted by Jordan Henderson.