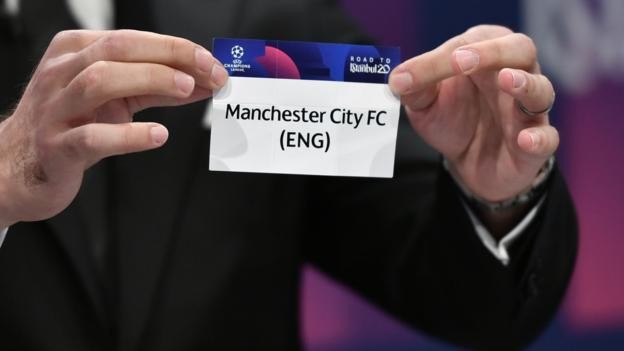 City have been banned from European club competition for the next two seasons, after "serious breaches" of Uefa's club licensing and financial fair play regulations.

They have said they will appeal it.

The reigning Premier League champions - who will take the appeal to the Court of Arbitration for Sport - have also been fined 30m euros (£25m). They said they were "disappointed but not surprised" and said the decision was "prejudicial".

"They've issued a strong statement to say they are going to try to correct this decision and I'm sure they will do but, regarding the club, you've got to look and say 'how far has this club come?'" said ex-midfielder Brown, who played 111 times for City between 1995 and 1999.

"Pep Guardiola will be aware of the prep and the planning. Will the recruitment be a little bit harder? Yes it will, but if any club and any owners can take this on, then I think it is Manchester City.

"We've seen how quickly they have grown and what type of backing they have and the ability they've got to grow the club, so they will take it in their stride. As for Guardiola, now this is a challenge for him. He's got a good squad and for any coach to take this on and develop players, it's Pep Guardiola."

They play Real Madrid in the last 16 with the first leg on Wednesday, 26 February.

"You would think that players would be less inclined to go there without Champions League football but with where the club is going and how big it's gone and with that sort of manager in place, people will still want to sign for Manchester City," Brown said.

"Let's see where it goes. We've got to be a little bit cautious because the club have come out and said they're not happy with the decision and they're going to fight it."

City, whose chairman is Khaldoon Al Mubarak, were fined £49m in 2014 for a previous breach of regulations.

"The money has certainly put them on a platform," said Brown. "But you've got to look at the planning, the appointment of Pep Guardiola, the purchases of football clubs all around the world, it's been an amazing turnaround. Yes, there's been financial help, but what've they've done as a football club, what they've done on the pitch, the way they've gone about it, I think they've been first class.

"They've been honourable how they've gone about it, as usual like Manchester City. This will be a shock for them but it will be something that they'll come out fighting.

"The owners aren't here for the short term, they will take it on. If any owners will take this adversity, it will be these."

Rhys: 100% sure CAS will overturn this. City have been working on this appeal for a while with one of the top law firms in the world. They have a really strong case and there is no doubt this will not be the final outcome.

Chris Arkwright: Let's be honest, two years just won't happen, Uefa made a huge issue creating a precedence with how PSG were treated a while back, never going to be held up by CAS.

Gwyl Davey: With this decision I feel Uefa are forcing the top clubs closer and closer to creating their own European Super League, seems very short-sighted by them - as their power wanes and the elite clubs grow...

Craig Atherton: The beginning of the end of FFP, which is all about keeping the status quo. City will challenge this with all their might through the courts.

Michael Reid: Is anyone who isn't actually a City fan disappointed by this? Great to see some action against the teams not abiding by FFP. Let's just hope the Premier League follows suit.

Brad Storch: It'll be interesting to see whether Man City put even more into winning the Champions League this season - or whether Guardiola goes in summer as he won't have chance fulfil his ambition for a fair while. Ban needs to be upheld or there's no value to FFP whatsoever.

Rycover: Pep now leaves in the summer along with a few well known players behind him... Potential fire sale? Massive!