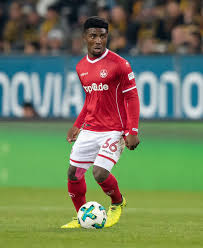 FC Magdeburg Technical director, Maik Franz has cautioned Ghanaian striker Manfred Osei to  up his game or suffer a split from the club in the summer.

Coach Stefan Kräme describes him as the striker with two faces. When training during the week, the German-Ghanaian from Kumasi is dominant and loud as a leader, puts pressure and hits. But there is also the other Kwadwo. The one who can hardly do anything on matchday. "If it were only halfway on the pitch that he offered in training, then ...", coach Stefan Krämer (52) breaks off his train of thought.

" however, he has fallen to a great low. For him it is now the fourth trainer with us. Either he takes the chance or we have to split up in the summer. This also applies to Manfred, who rarely shows his qualities."

His contract expires in summer until then, he has to provide convincing arguments for an extension.

He has been with the club for eighteen months and has started only four times.