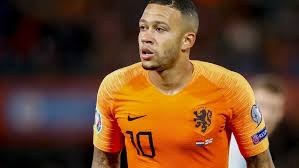 Depay has been a key cog of Ronald Koeman's side and will be given every chance to prove his fitness.

"He (Depay) had the same thigh injury which forced him to miss our last game against Belarus, but this time on the other leg," Koeman told a news

"It’s too early to say whether he will be able to play on Saturday, although Memphis himself is quite positive about it."

"If Memphis cannot play against Northern Ireland, I’ve got four other options who can fill his position."

The Dutch came from one goal down to beat Northern Ireland 3-1 at home last month, before winning 2-1 away to Belarus.

They have 15 points along with Germany but a better head-to-head record. Northern Ireland are three points adrift.