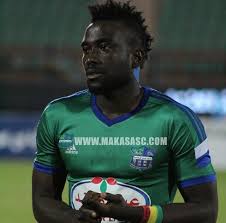 Poku’s arrival will mean Zamalek will have to do away with one of their four foreign-based players which includes Ghana’s Benjamin Acheampong, Kabongo Kasongo, Moruf Yusuf and Hamdi Nagguez.

The former Ashanti Gold attacker struggled for game time at Misr El-Makkasa as his position was occupied by another Ghanaian John Antwi who joined the Club from Al Ahly.

He is expected to play a key role in the team's quest of winning this season's Egyptian league.