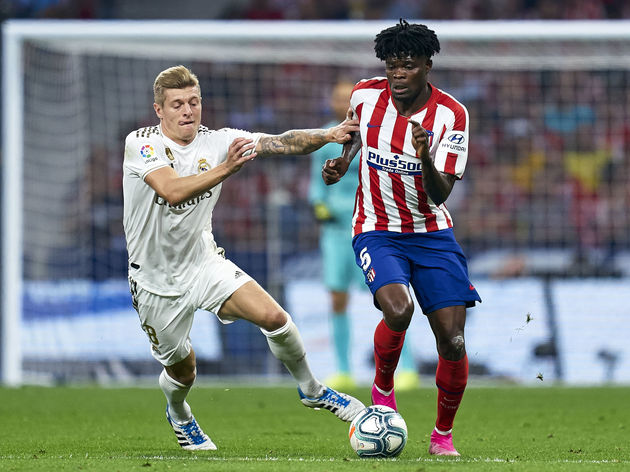 Footballghana.com will bring to you how Ghanaian players abroad performed in their respective leagues across the globe every week.

Solomon Asante has won the USL Championship title with Phoenix Rising as his side drew 2-2 against New Mexico. Asante currently leads the goal king chat with 22 goals and has registered 15 assists

Thomas Partey was adjudged the man of the match in the Madrid derby over the weekend which ended in a stalemate. The Black Stars midfielder played one of his best games in the season for Atletico

Herbert Boakye Yiadom gives you a lowdown on how the players fared in abroad...

Jordan Ayew saw 89 minutes of action for Crystal Palace in their 2-0 win over Norwich. Jeffrey Schlupp played the entire duration for Palace

In the Championship, Albert Adomah saw 14 minutes of action for Nottingham Forest as they won 3-2 against Stoke

Andy Yiadom scored the equalizer for Reading in the game

In the League One, Kwesi Appiah picked a yellow card and lasted the entire duration for AFC Wimbledon as they lost to Peterborough

In the National League, Ofori-Twumasi Nana and Bernard Mensah featured for Maidenhead as they lost 2-0 to Barrow

Mubarak Wakaso was yellow carded in Alaves game against Mallorca which ended 2-0. Iddrisu Baba played 76 minutes for Mallorca. Lumor Agbenyenu warmed the bench whilst Baba Rahman missed the game due to injury

In the La Liga 2, Raphael Dwamena saw 63 minutes of action for Real Zaragoza as they drew 2-2 against Real Oviedo

In the Ligue 1, John Boye played the entire duration for FC Metz in their 2-2 draw against Toulouse

In the Ligue 2, Ebenezer Assifuah was introduced in to the game for Le Havre in the 81st minute as they lost to Chateauroux

In the Serie A, Kwadwo Asamoah played the full throttle as Inter Milan defeated Sampdoria 3-1

In the Serie B, Bright Adde played the full throttle for Juve Stabia as they lost to Cittadella

Opoku Ampomah and Bernard Tekpertey both came off the bench to play for Dusseldorf in their 2-1 defeat to Freiburg. Kasim Nuhu and Kelvin Ofori were unused substitutes in the game

In the Bundesliga II, Kyereh Daniel-Kofi came off the bench to play 27 minutes for Wehen in their 2-0 win over Osnarbruck

In the Bundesliga III, Manfred Kwadwo made a brief appearance for Magdeburg in their 3-0 win over Wurzburger Kickers

Isaac Donkor warmed the bench for Sturm Graz in their 4-1 win over Admira. Seth Painstil lasted 90 minutes for the losers

Joseph Painstil saw 23 minutes of action for Genk’s as they drew 3-3 against St. Truiden. Samuel Asamoah missed the game

Jonathan Osabutey was substituted in the 80th minute for Mouscron as they drew 2-2 against Waregem. Gideon Mensah lasted the entire duration for Waregem

Daniel Opare missed Antwerp’s game against Oostende due to injury

Nana Asare lasted 90 minutes for Gent in their 2-0 win over Kortrijk. Eric Ocansey was introduced into the game from the bench

In the Proximus League, Kamal Sowuah featured for Leuven as they won 2-1 against Beerschot

Nordsjaelland Christopher Antwi, Isaac Atanga, Mohammed Kudus featured for Nordsjaelland as they lost to Aarhus by 3-1

Alhassan Wakaso and Aziz both missed Guimaraes game against Ferreira

Zuberu Sharani made a brief appearance for Dun.Streda as they won 1-0 against Zina

Caleb Ekuban missed Trabzonspor game over the weekend due to injury