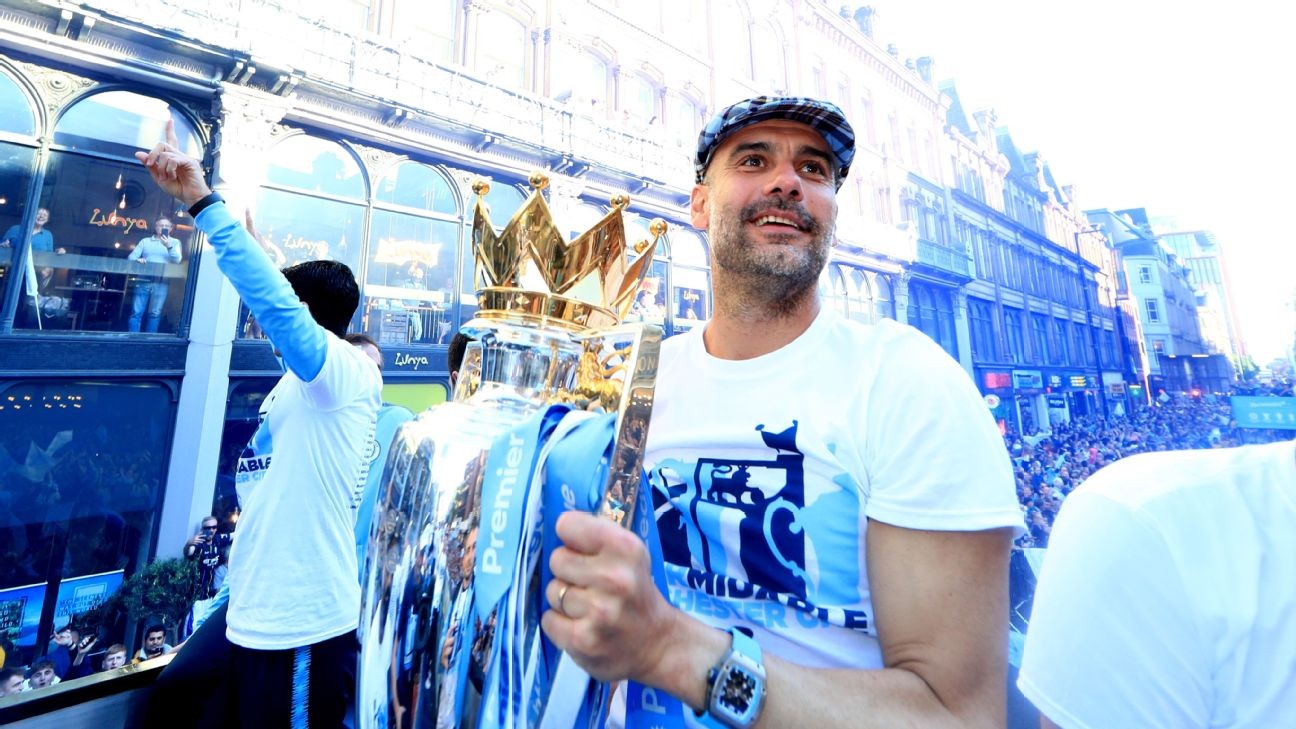 With no director of football in sight for Manchester United, the FC guys debate whether the Ed Woodward's transfer-by-committee method still works.

The countdown to the 2019-20 Premier League has now begun with the publication of the fixtures for the new season and it promises to be a box office start, with Manchester United hosting Chelsea at Old Trafford on the opening weekend.

There are a clutch of heavyweight clashes during the first month as Manchester City, on the back of last season's domestic treble, begin their bid to win a third successive Premier League title with an away game at West Ham on Aug. 10.

Champions League winners Liverpool, having gone so close to winning their first title since 1990 last term, feature in the curtain-raiser at home against promoted Norwich City, and they will expect to run Pep Guardiola's team close.

So who has had the most favourable fixture list and which club is facing a nightmare start? Here is the rundown of the big games and the outlook for every Premier League team.

EASIEST START: Manchester City
Although City face a tough home game against Tottenham on Aug. 17, that is the only fixture during their opening six matches where they would be expected to face a true challenge for all three points. An opening day trip to West Ham, where City won 4-0 last season, is a comfortable start and Guardiola's men also play Bournemouth, Brighton, Norwich and Watford before travelling to Everton on matchday six. With most of their top-six rivals facing at least two rivals in the first six games, City have the chance to get off to a flyer, again.

Pep Guardiola will not be complaining about Manchester City's opening run of fixtures.

TOUGHEST START: Manchester United
United's dismal end to last season, when they won just two of their last 12 games in all competitions, has put manager Ole Gunnar Solskjaer under pressure before a ball has even been kicked. A start that sees them host Chelsea on the first weekend and then travel to Wolves, who beat United twice at Molineux last term, is a nightmare. Spurs, Chelsea and Arsenal also have it tough in the first six games, but no team needs to get out of the blocks quickly more than United and their schedule, which also includes trips to Southampton, Leicester and West Ham, offers no margin for error. United don't face a promoted team until they travel to Norwich on Oct. 26, so Solskjaer needs his players to hit the ground running.

Aug. 11, Manchester United vs. Chelsea: A true heavyweight clash on matchday one, but it is a game that neither side can afford to lose due to the pressure on Solskjaer and the likelihood that it will also be the first game in charge for a new boss at Chelsea. It would be way too early to assess either side's credentials after just one game, but the reality is that both will be judged on what happens during this first 90 minutes, so it is crucial that they get off to a good start, but only one team can do that.

Oct. 19, Manchester United vs. Liverpool: Despite United's recent fall from grace, this remains the most historic fixture in English football and the men from Old Trafford will be desperate to show their ability to compete against the best by beating their bitter rivals, who will face United as European champions for the first time since 2005. United have a long way to go to close the gap on Liverpool, but this game will offer an early gauge of the progress under Ole Gunnar Solskjaer and also tell us whether Liverpool are capable of winning the title.

Nov. 9, Liverpool vs. Manchester City: The European champions against the domestic treble winners and reigning Premier League champions: this game doesn't need any build-up or hype because it is unquestionably the one which will set the tone of the title race. The first encounter between Liverpool and City will be crucial and give an indication as to which club is most likely to win the title. The rest may believe they can compete, but last season's top two are the clear favourites to contest this year's race too.

April 4, Manchester City v Liverpool: Over the past two seasons, City and Liverpool have got their head-to-head fixtures out of the way by mid-January, but this time around, they will meet for the second time just as the title run-in begins to shape up. If the title race is close by the beginning of April, this game at the Etihad could tilt the title race in the favour of the winners, with both sides having just six league games to play after this colossal encounter.

April 25, Tottenham v Arsenal: Barring an encounter in the cup competitions, this will be the first North London derby to be staged at Tottenham's new stadium, so the game will have plenty of significance, regardless of where the teams sit in the league table. But with the clash being pencilled in at such a late stage of the season, the game could turn out to be decisive in the race for Champions League qualification.

ARSENAL | Predicted finish: 5th
Games against Liverpool and Spurs in August ensure Arsenal face a tough start to the season and they meet the same two sides during the final four games in a tricky run-in. Arsenal must also navigate the Europa League next term, so it is tough for Unai Emery to break back into the top four.

ASTON VILLA | Predicted finish: 16th
Promoted Villa start away at Spurs, but after that they have a relatively comfortable start that could help build confidence and momentum back in the top flight. It won't be easy, but Villa should have enough to stay up.

BOURNEMOUTH | Predicted finish: 17th
Eddie Howe's side open up with games against promoted Sheffield United and Aston Villa, so they have to make a strong start. Bournemouth usually do enough to stay safe, but an alarming form slump last season suggests they face a tougher time this season.

BRIGHTON | Predicted finish: 18th
Graham Potter has been handed the task of steering Brighton away from the relegation battle that cost Chris Hughton his job at the end of last season, but the new manager has a fight on his hands, despite a soft start that sees the club open up against Watford, West Ham and Brighton.

BURNLEY | Predicted finish: 13th
Sean Dyche's men face Arsenal, Wolves and Liverpool in the first four games, but Burnley ended last season as one of the form teams in the Premier League and, without the drain of Europa League qualifiers this time around, a better start will tee up a season in mid-table.

CHELSEA | Predicted finish: 4th
The big question to be resolved is who will be the Chelsea manager next season. The club also have the issue of a two-window transfer embargo hanging over them, but even without the departed Eden Hazard, the shortcomings of Arsenal and Manchester United should ensure that Chelsea are favourites for a top-four finish.

CRYSTAL PALACE | Predicted finish: 15th
Palace have enough depth in their squad to be confident of avoiding a relegation battle, but clashes with Chelsea, Manchester United and Spurs during their final six games will be a concern if they are in the relegation mix.

EVERTON | Predicted finish: 8th
Marco Silva appeared to turn the tide at Everton in the final weeks of last season and offer optimism of a push for Europe this season. Leicester look their biggest rivals for seventh spot and their encounters on Nov. 30 and April 4 will be key.

LEICESTER CITY | Predicted finish: 7th
The opening day clash with Wolves at the King Power Stadium gives Brendan Rodgers' team the chance to hammer out their credentials as the team most likely to finish seventh. Leicester could even threaten the top six, but being the best of the rest will be the initial objective.

LIVERPOOL | Predicted finish: 1st
Jurgen Klopp has now broken his trophy hoodoo at Anfield by winning the Champions League and all attention will turn to the Premier League title this term. It could all hinge on the two games against Manchester City, but now they have tasted silverware, Liverpool can end their 30-year title drought.

MANCHESTER CITY | Predicted finish: 2nd
City are formidable and could yet make it a hat trick of titles, but the club and Pep Guardiola desperately want Champions League glory and after falling short last season, it may be a case of City focusing on Europe, which will give Liverpool that chance to snatch their domestic crown.

MANCHESTER UNITED | Predicted finish: 6th
United are in a state of flux and need a big summer to snap out of their downward spiral. If that doesn't happen, sixth is the best they can hope for, but the big worry will be the likes of Leicester, Everton and Wolves snapping at their heels if they have another bad campaign.

NEWCASTLE UNITED | Predicted finish: 14th
As it stands, with Rafael Benitez at the helm and a proposed takeover underway, Newcastle should be able to go into the new season with optimism. But if Benitez leaves and / or the takeover fails to happen, Newcastle could be quickly dragged into a relegation scrap.

NORWICH CITY | Predicted finish: 19th
Every promoted team dreams of a soft start in order to get points on the board, but with fixtures against Liverpool, Chelsea and Manchester City in their first five games, Norwich face an uphill battle from day one. Tough to see Daniel Farke's team avoiding the drop.

SHEFFIELD UNITED | Predicted finish: 20th
Chris Wilder has worked a sporting miracle at Bramall Lane by guiding the Blades from League One to the Premier League, but even though they have a decent start and comfortable looking run-in, it will be an immense achievement if United avoid the drop.

SOUTHAMPTON | Predicted finish: 11th
Ralph Hasenhuttl made an impressive start to life at Southampton after replacing the sacked Mark Hughes in mid-season, and the Saints should be comfortable in mid-table this time around. Aside from games against Liverpool and Manchester United in their first six, Southampton have a good early schedule.

TOTTENHAM | Predicted finish: 3rd
Having left Wembley behind to move into their new stadium, Spurs should have no homesickness concerns this time around. They still lack the depth to push for the title, but they should be comfortable in third and could go higher if they invest well in the squad this summer.

WATFORD | Predicted finish: 12th
Can Watford recover from the psychological blow of losing 6-0 to Manchester City in the FA Cup final, and can they hold onto manager Javi Gracia? Two big questions that will define Watford's season, but in terms of their squad, they shouldn't fear a relegation battle.

WEST HAM | Predicted finish: 9th
Manuel Pellegrini has brought a rare sense of calm and stability to West Ham and the Chilean can build on that this season by making the team challengers for Europe. And a positive result, however unlikely, at home to Manchester City on day one would give the Hammers momentum.

WOLVES | Predicted finish: 10th
Wolves have big ambitions of Champions League football at Molineux, but with a Europa League campaign looming -- if they make it through three qualifying rounds -- they face a battle to repeat last season's seventh-place finish, especially with Leicester, Everton and West Ham on the rise.