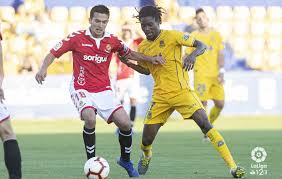 Ghanaian midfielder Richard Boateng scored for Real Oviedo when they defeated Alcorcon 3-1 in the Spanish Segunda Division on Friday.

Real Oviedo took the lead in the 11th minute through Borja Sanchez’s strike before Edgar Barcenas added the second four minutes later to give the away team a two-goal lead within the first 15 minutes of the match.

Boateng pulled one back for the home team in the 22nd minutes to half the deficit before half time.

The 27-year-old was replaced with Daniel Romera on the hour mark.

Alcorcon remains on the 10th position on the league table after suffering a disappointing 3-1 defeat at home to the  Real Oviedo side.