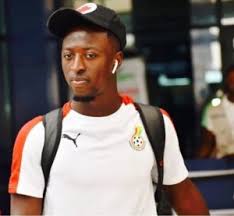 Black meteors winger Robin Polley is disappointed  with his poor output in the ongoing AFCON U23 Tournament.

The Ado Den Hag  right-back emphasized that he is glad with the skill he had gotten from the tournament but he is down with his output as he is not showing enough.

“Full bag of experience I take it with me for the journey. Sad that I still not have prove the player I am it takes time. As team we lost a battle but not a war Friday we have the chance to still get the tickets to Tokyo so don’t lose hope.” Polley emphasized.

Robin could found himself out of the starting lineup as Ghana battle South Africa for the final automatic spot for the 2020 Olympic Games on Friday at the Cairo International Stadium.

He lasted 27 minutes in Ghana's semi final crash against neighbouring country Cote D'ivoire his second in four games for Ghana in the tournament so far.