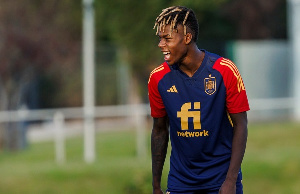 Spanish-born forward Nico Williams could make his debut for Spain when they face Switzerland on Saturday, September 24 at the La Romareda stadium in Zaragoza.

The 2010 World Cup winners will play Switzerland in the UEFA Nations League and the 20-year-old winger who earned an invite is likely to make his debut.

The fast-rising winger is expected to have some few minutes to test his abilities and, in the process, close the option so that Ghana can forget about him for a while.

Nico Williams has been instrumental for Athletic Bilbao this season, scoring 2 goals and providing 2 assists in 6 matches.