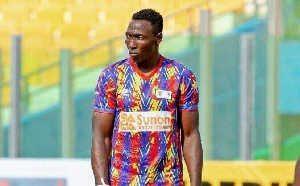 Hearts of Oak striker Kofi Kordzi has pleaded with the club and the entire public after violating terms of his contract.

The budding forward has been suspended for featuring in a football match on May 14 without authorization from the club.

However, the Phobians have suspended the player from the senior team for the next two-weeks and will be training with the junior side, Auroras.

In a post sighted by Footballghana.com, the enterprising forward has pleaded with the club and has therefore vowed to show commitment before and after suspension.

“I want to take this opportunity to issue a public apology for the choices I made weeks ago. I understand that my position as a professional footballer brings the responsibility of displaying the act of professionalism and being a role model” he posted on Facebook.

“As such, I want to apologize to my family, friends, football club, supporters and the public for letting them down. Obviously, it's up to me now to restore your trust and I'll do my best to show commitment every day on the training ground both now on suspension and after suspension and most importantly on match days as well. Thank you all once again for your immense support”

Kordzi scored seven goals in the ongoing Ghana Premier League campaign but has not been part of the club’s matchday squad in recent times.