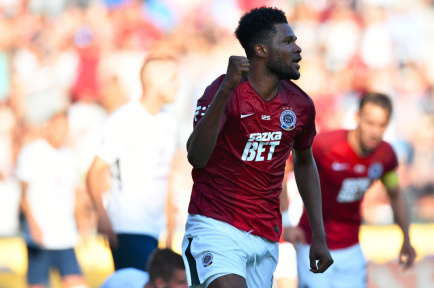 The Tigers are hoping to complete their transfer activities as early as possible to being preparation for next season and one name making the news over the past few months is Ghana striker Benjamin Tetteh.

Those many fans won’t be familiar with players plying their trade in the Turkish Superliga, here is the lowdown on Tetteh who manager Shota Arveladze is said to be keen to add to his squad.

Tetteh is a 24-year-old Ghanaian international forward, playing for Malatyaspor in Turkey. He was bought to the club for a fee of just under £2million last summer, joining from Sparta Prague.

During his time at the Czech side, he played 75 times and scored 19 goals. Before moving to Sparta, he had played in the Belgian Pro League for Standard Liege and then dropped to the lower divisions of Czech football, where he was noticed and signed by Sparta.

What position does he play?

Primarily a centre forward, although he has also featured from the left wing. He has scored eight goals and made three assists this season in 1,974 minutes. That’s a return of 0.36 goals and 0.12 assists per 90 minutes.

What has he achieved in his career?

Tetteh has cup winner medals from his time at both Sparta and Standard Liege. However, he only featured for a small amount of minutes as a substitute in Liege’s cup run, whilst he played three times during Sparta’s, scoring once and assisting another goal.

The Ghanaian international has three years left on his current contract with Malatyaspor.

Tetteh made his debut for the Ghana national team on October 9 2021 in a World Cup qualifier against Zimbabwe.