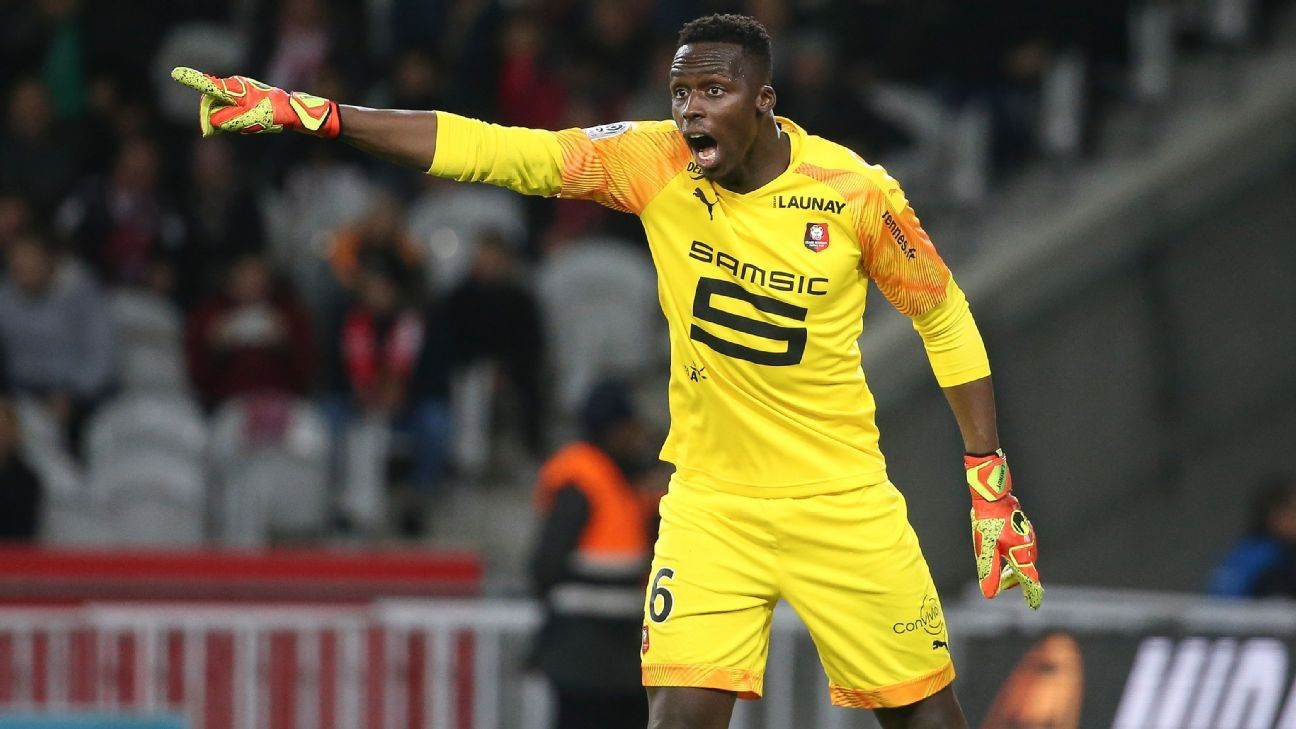 Chelsea have been told that they will have to fork out at least £30 million if they are to sign goalkeeper Edouard Mendy from Stade Rennes. Contrary to L'Equipe's report earlier Wednesday that the Ligue 1 club have valued the shot-stopper at £22m, the Telegraph said they are after an additional £8m.

Frank Lampard's pursuit of a new goalkeeper comes after Kepa Arrizabalaga was dropped twice in favour of Blues' backup Willy Caballero last season. That's despite Kepa breaking the world record for a goalkeeper two years ago when he joined the Stamford Bridge club for a whopping £71.6m.

The report adds that the chances of Kepa leaving Stamford Bridge remain unlikely as he appears to be willing to stay and fight for his place.

The Dutchman, who has 10 caps for the orange shirts, offers Ole Gunnar Solskjaer quality and quantity in equal measure. Predominantly a box-to-box midfielder -- though he's also had stints as a "holding" player in front of the defense -- Van de Beek features all the essential skills that make up a modern central midfielder. He is excellent on the ball, has an exceptionally well-developed footballing brain and boasts the ability to cover a lot of ground.

Gab Marcotti says "it's not a good look" for Gareth Bale to be complaining about Real Madrid not letting him go.

08.34 BST: Gareth Bale has said he would be open to leaving Real Madrid this summer, but the club "make things very difficult."

Bale barely featured for Madrid last season, being left out of the squad entirely for their Champions League round-of-16 second leg defeat to Manchester City, as ESPN reported that his relationship with coach Zinedine Zidane had reached breaking point.

Sources have told ESPN that Madrid are keen to let Bale go, but are yet to receive a formal offer for the former Tottenham Hotspur star during this transfer window.

"If [offers from Premier League clubs] arise, it is something I'd look at for sure," Bale told Sky Sports News. "Time will tell but mainly I think the reason is that the decision is in Real Madrid's hands. I tried to leave last year but they blocked everything at the last second."

TyC Sports reported on Wednesday that the two sides have already agreed to terms. However, sources told ESPN that talks are still ongoing.

The Athletic has also reported that Miami has obtained Higuain's discovery rights -- akin to a right of first refusal -- from D.C. United, which would clear the way for the player to head to South Florida.

Higuain, 32, is free to leave Juventus after new manager Andrea Pirlo said the Argentine striker is not in his plans. If the Miami deal is completed, Higuain would join former Juventus teammate Blaise Matuidi in Miami, as well as his older brother, D.C. United's Federico Higuain, in MLS.

Hérculez Gomez weighs in on whether or not Gonzalo Higuain is the "big name" signing Inter Miami need.

Internazionale are reported to be in negotiations with fellow Serie A side Hellas Verona concerning a possible move for striker Oliver Jurgens.

Italian reporter Gianluca Di Marzio say Antonio Conte was impressed by the Estonian teenager's efforts during a loan spell with AS Roma that started in January. Conte is now at the forefront of the race to snap up Jurgens, with the 17-year-old also attracting attention from Valencia and Leicester City.

Meanwhile, Di Marzio also claims in a separate report that Inter have completed negotiations with Roma to bring in veteran defender Aleksandar Kolarov on on a deal worth €3.5m per year.

- Premier League newbies West Bromwich Albion have made an approach to sign Chelsea's Michy Batshuayi on loan, according to Football Insider. Chelsea are said to be comfortable with the idea of Batshuayi leaving on loan, but would be more content to secure a permanent move for the 26-year-old Belgium international. Two years ago, Batshuayi was reportedly valued at £50m amid interest from West Ham United.

- Scottish club Hearts are set to sign Preston North End winger Josh Ginnelly on a season-long loan, Football Insider also reports. The 23-year-old has only one season remaining on his contract at Preston and will become a free agent next season.