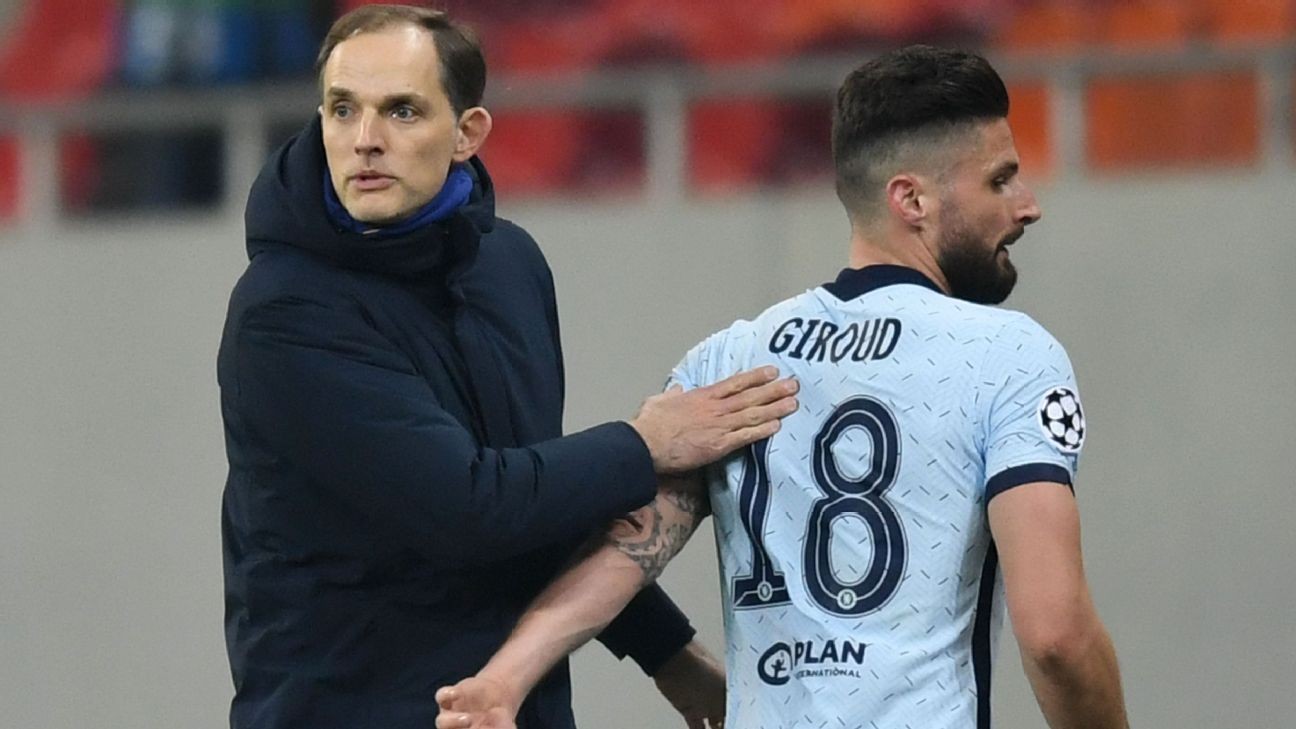 Chelsea's Champions League Round-of-16 match against Atletico Madrid in Bucharest was always going to be a tight affair, and that's exactly how it turned out.

It was the Blues who managed to get the foothold in the game, as Olivier Giroud's superb overhead kick in the 71st minute was given after a lengthy VAR check, with the goal initially ruled out for offside.

They managed to see out the game from there and take a 1-0 advantage -- and an away goal -- into the second leg.

Premier League fight for fourth: Liverpool to miss out? Breaking down the battle, key men

Chelsea were able to get plenty of good possession of the ball, with Diego Simeone's side dropping deep for large periods. Chelsea had the better of the game's chances, and it is a massive bonus that Giroud managed to get on the scoresheet. Despite Atletico also getting half-chances, there weren't too many clear openings for the home side and Edouard Mendy was rarely worked.

Chelsea were absolutely awful at the beginning of the game and could have easily found themselves a goal down within the first couple of minutes. Part of this was due to them giving the ball away in dangerous areas. Lastly, Mason Mount and Jorginho will miss the second leg due to bookings picked up in this game.

8 -- Thomas Tuchel's decision-making was questioned after he harshly took off Callum Hudson-Odoi in the last game, but it certainly won't be here. The German's side came up against a very resolute Atletico Madrid side and showed plenty of discipline, while also bagging the goal that gives them an advantage heading into the second leg.

GK Edouard Mendy, 5 -- Often looked uncomfortable. Was let off after a poor touch two minutes in and some of his kicking wasn't the best. His shot-stopping wasn't tested too much.

DF Cesar Azpilicueta, 8 -- Stepped up out of the backline well when Chelsea had the ball or when he had to follow a home attacker dropping deep. Did a good job of keeping Joao Felix quiet.

DF Andreas Christensen, 7 -- Occasionally gave away silly fouls but was disciplined and resolute in his defending.

DF Antonio Rudiger, 8 -- Played some wonderful long passes and held his own defensively, making a superb block shortly after Giroud's goal -- though he did have a scare when Luis Suarez dispossessed him early on. Almost lost his cool with the Uruguayan.

MF Callum Hudson-Odoi, 7 -- Had a fascinating battle with Thomas Lemar, with the pair both doing well in their defensive responsibilities. The Londoner also offered a threat going forward.

MF Jorginho, 6 -- Had plenty of good ideas with his passing, but the execution was just off, as was the case on the occasions when he tried to release Mount and Hudson-Odoi. Booked for a foul on Felix.

MF Mateo Kovacic, 6 -- The Croatian put in a combative performance and made some good runs forward, but his decision-making could have been slightly better at points.

MF Marcos Alonso, 7 -- There are questions over his defensive capabilities at times, but Alonso was brilliant in that regard. He got his head onto some awkward balls and remained composed in 1v1s. Provided real quality with some of his crossing.

Olivier Giroud once again produced the spectacular, his moment of brilliance the difference in a tightly-contested first leg vs. Atletico Madrid. Getty

FW Mason Mount, 7 -- Booked a minute in for a foul on Felix, but continued to make an impact for Chelsea. Linked the play wonderfully at points and his battling led to Giroud's goal.

FW Olivier Giroud, 8 -- Held the ball up well at points but was always surrounded whenever he had it in a decent position. However, he made the most of his best chance with a wonderful overhead kick.

FW Timo Werner, 6 -- Missed a decent chance early on, but was always showing for the ball and looked very sharp in a lot of his play.

MF N'Golo Kante, N/R -- Replaced Mount in the 74th minute and got to work breaking down Atletico's play immediately.

DF Reece James, N/R -- Came on for Hudson-Odoi in the 80th minute and filled in to make it more of a back five as Chelsea saw out the game.

MF Kai Havertz, N/R -- Provided some clever touches in his three minutes on the pitch to help Chelsea see out the game.

MF Christian Pulisic, N/R -- The American got a late run-out and was intelligent in his play, drawing a foul from Lemar.