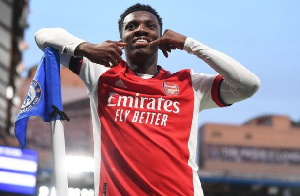 English Premier League side West Ham United have emerged as favourites to land Ghanaian forward Eddie Nketiah ahead of next season, Footballghana.com can report.

The youngster who has been on top form for the Gunners in recent times current contract will elapse at the end of the season.

The England youth star has bagged four goals in his run of five starts and has become an important player for Mikel Arteta side.

Meanwhile, Eddie Nketiah, who has rejected contract renewal offers from the Gunners is yet to decide on his future.

After scoring twice against Leeds on Saturday (7 May) Kenny claims Nketiah could be an ideal summer signing for the Hammers.

“I think it has cost them in the end because Antonio has dried up and his fitness is always in question anyway.

“If they have the opportunity to sign Nketiah on a free, well, he’s already in London. I imagine they are favourites.

“West Ham is a massive club as well, with a massive fan base. Any player would be lucky to go there.

“For me, it’s a great signing and it would be a brilliant piece of business if he comes on a free.

“I think he’s perfect for what they are looking for.”

Nketiah has made 89 appearances for Arsenal, scoring 22 goals.