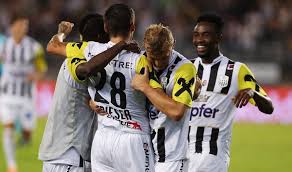 Ghanaian winger Samuel Tetteh played a cameo role for his LASK Linz side on Sunday afternoon when they posted a 2-0 win over Austria Vienna at the Linzer stadion.

The two clubs locked horns in a match week 13 fixture of the 2019/2020 Austria Bundesliga in hopes of bagging an important 3 points to improve their respective positions on the League.

At the end of a very good contest, it was the home side that exerted their supremacy to ensure they run away with all points.

A first-half strike from Ranftl Reinhold together with an equalizer from Petar Filipovic on the 64th minute sealed an important win for LASK Linz.

Samuel Tetteh who started the match from the bench was introduced into the game on the 79th minute and managed to make some dangerous runs into the opposition’s territory.

Having contributed to the win, the side is now placed 2nd on the League standings and just 2 points shy of leaders Red Bull Salzburg.