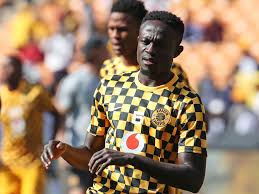 South African side Black Leopards have no interest in signing Ghanaian midfielder James Kotei from Kaizer Chiefs in the on-going transfer window.

Coach Luc Eymael has ruled out a possibility of signing the 26-year-old, who has been linked with a move away from the Soweto giants.

He believes the Kotei needs to recover mentally or physically at Kaizer Chiefs before moving elsewhere to continue his playing career.

Eymael told the Siya crew, "We are not signing James Kotei from Kaizer Chiefs, because Kotei is settled at the club but he wants to rest some months, because he has to recover mentally or physically at Kaizer Chiefs..."

"He came from Ghana to Kaizer Chiefs and signed a three-year contract and hasn’t played until now and he’s very weak mentally now because of that. So, he wants to stay for some months without soccer."

The midfielder has already featured in the Tanzanian league for Simba FC before joining the ABSA Premier League leaders in 2019.

He is yet to make his official debut for Kaizer Chiefs. since joining them.