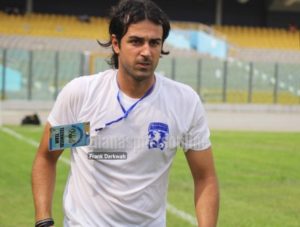 Head Coach of Bechem United Vicenzo Alberto Annese has lamented over the missed chances in their match day 14 game against Aduana Stars in the Ghana Premier League.

The hunters had a first half lead through Eric Owusu cancelled out by Zakaria Mumuni as they were held at home.

The FA Cup champions controlled the first half of the game, creating lots of chances however they failed to bury those chances which has left the Italian manager unhappy.

“It was a difficult but we complicated the game for ourselves. In the first half, we lost about two, three, four good chances to score easy goal. One time, one on one with the goalkeeper and another one against one player so if you don’t put the ball in the net you can’t talk about easy match,” he said after the game.

“I am very sad for this because we prepared very well for this game in terms of tactics and everything, we were perfect. I wanted the win for our fans.”

Becehm United are now sixth on the table and will play Aduana again when the second half of the season begins.