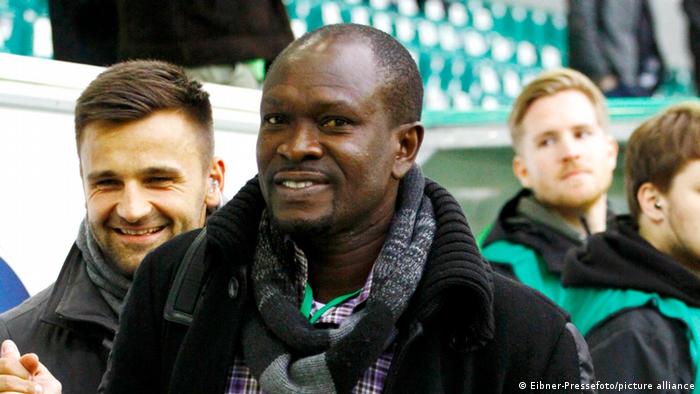 After appearing in almost 350 games in Germany, Charles Akonnor is now pursuing a coaching career in his home country, Ghana. He's determined to make the "Black Stars" African champions and World Cup contenders.

When the president of Ghanaian football, Kurt Okraku, introduced Charles Akonnor as the new national team coach in January 2020, he smiled — but also left the former Bundesliga player with no doubt about what was expected of him.

"Win the next African Cup of Nations and lead Ghana to the 2022 World Cup finals in Qatar," he says

Okraku could hardly have placed a heavier weight on the man's shoulders. But Akonnor put on a brave face and did not contradict his boss: "Of course it will be difficult and we all have to pull together to achieve our lofty goals. But I also like to set the bar high because I want to make a difference in Ghana's football," he says.

More than a year later, Akonnor is finally able to properly set into his role as coach of the "Black Stars." The false start happened after COVID-19 struck with full force in his home country and halted his plans. It was not until October, nine months after being appointed, that Akonnor coached his first game, a friendly. After losing 3-0 to Mali, Akonnor was delighted to register a straightforward 5-1 win against World Cup hosts Qatar three days later.

But that first defeat sent the press into a frenzy and his decisions were questioned publicly.

"The pressure here in Ghana as a national coach is enormous. It's not at all comparable to Europe. Here, everyone wants to have a say, to have a say and knows everything better. If you lose once, you're immediately the fool," the 47-year-old told DW.

It seems to be an advantage to have a "thick skin" as a coach and person. Akonnor has already shown that in the course of his coaching career. Immediately after hanging up his boots, he became a co-coach in the youth section of the Ghana Football Association, while, at the same time, taking coaching badges with UEFA and completing internships at European clubs including Tottenham, Wolfsburg and Manchester City.

In 2009, he took up his first post as sports director at Eleven Wise in Sekondi, in his homeland. There and later as head coach at Hearts of Oak in Ghana's capital Accra, at Dreams FC, but especially in 2016 with Ashanti Gold FC, he honed his reputation as a "German with Black skin."

"I have always taught my players that the discipline I learned as a professional in Europe is a key to success," Akonnor explains. "Reliability and punctuality, not always virtues that stand out in Ghana, are high on my list. Hence this nickname."

Akonnor's family still lives in Hanover, so he is a regular visitor to Germany, the country he moved to in 1992. Before that, in Nungua, a suburb of Accra, Akonnor's football talent was recognized at the local school. At the age of 14, he moved to Okwahu United, part of Ghana's top flight. When he was 18, German second division club Fortuna Köln came knocking on his door through a consultant with knowledge of Africa. For six years, Akonnor directed proceedings from midfield for Fortuna. Then, in 1998, second-division club FC Gütersloh signed him, but sold him directly to Crystal Palace in England. But the deal fell through when the London club changed owners, and Akonnor was back on the market. Wolfsburg took advantage of the opportunity, where the then 24-year-old became a solid Bundesliga pro and, eventually, a Ghanaian international.

Since hanging up his boots in 2009, Akonnor has had significant success as a coach in Ghana, particularly in recent years. He saved Ashanti Gold from relegation in 2016-17 and followed that up with a third-place finish in Ghana's Premier League the following season.

This attracted the attention of the management at top club Asante Kotoko, which brought Akonnor in for the 2018-19 campaign. He won the league in his first year on the job and got Asante Kotoko to the group stage of the CAF Confederation Cup. Akonnor was named Ghana's coach of the year and it wasn't much longer until the national team came calling.

Unfortunately, though, by the time he was appointed as coach of Ghana in January 2020, the COVID-19 pandemic was just around the corner — making for a difficult start as a national team coach. Now, though, Ghana need to win just one of their final two games in Group C of qualifying for the Africa Cup of Nations — in South Africa and Sao Tome later this month — to book their tickets for Cameroon in 2022.

"We'll need to be fully focused for the game in South Africa. We are aiming to clinch it with a win there," Akonnor says.

'Need to bring in younger players'

Akonnor has been under fire in the weeks leading up to those two key matches, with several former Ghana internationals as well as countless members of the press criticizing him for relying almost exclusively on players from the domestic Premier League.

"That was purely a precautionary measure at first," explained Akonnor, who last autumn was forced to do without almost all the Ghanaians who play in Europe due to the coronavirus pandemic.

"I was able to take a hard look at the best guys here from the league here in a two-week training camp. This was also an important thing to do as we look towards the future with a view of bringing younger players into the national team."

In the short term, though, he will continue to rely on veteran stars such as the Ayew brothers Andre and Jordan, Kwadwo Asamoah and Christian Atsu.

"We can't do without them yet, we need their experience in the decisive games," Akonnor says.

This also applies to World Cup qualifying, which is a particularly difficult matter in Africa, as the continent has been allotted just five slots for Qatar. In the preliminary group, Ghana is to again face South Africa, as well as underdogs Zimbabwe and Ethiopia. Only the group winner advances — and then has to come through a playoff against another group winner to qualify for the World Cup finals in the winter of 2022.