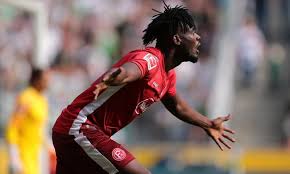 Kasim Adams came from Hoffenheim to Fortuna, should compensate for the departure of Polish international Marcin Kaminski.

So far, the Ghanaian in Fortuna dress quite strong performances. But in between he lets the fans with avoidable mistakes catch his breath.

The prime example of this was the game on Schalke. For long stretches, the 24-year-old showed great strength against the squires.

On the offensive top, sometimes defensive in the defense

On the offensive his header led to a corner to the hand penalty.

But on the defensive many fans chalked him all three goals.

At the first goal Adams was lured out of the penalty area by Daniel Caligiuri, then was played by a double pass from Caligiuri with Raman. The German-Italian then scored the 1: 0.

The truth is that the entire defense was disordered at the moment and there was no protection for the advancing Adams.

The second goal is just the "headball monster" Adams skipped by Schalkes Özan Kabak, does not really get into the air duel.

But in this scene, too, there are two points of view. Kabak starts at a fast pace. Kaan Ayhan could have disturbed this walk. Adams then had no chance against the pace of Kabak.

The third goal was then just bad luck: The Fortuna defense leaves the Schalke Harit run much too long. As Harit the ball is spiked, Morales and Adams come under the motto "Take him, I've got him safe" in the way.

Adams tries to knock the ball off, but then only Suat Serdar falls to his feet. His shot fakes Adams then also untenable for Zack Steffen.

His coach Friedhelm Funkel sometimes has to swallow such actions. But on the other hand, he also sees the strengths of the center-back: The incredible physical presence and just the big Torgefahr at their own standards.

Kasim Adams helps the other Ghanaians at Fortuna Dusseldorf

And Adams is indispensable in another respect: he is, though hardly older, the mentor to the other Ghanaians Nana Ampomah, Bernard Tekpetey and Kelvin Ofori. "I try to help them and to give tips," says Adams, who brings along in Bundesliga experience and games in the first Swiss league and in the second Spanish league.