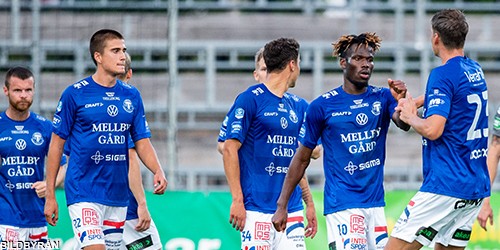 Ghanaian striker, Abdul Fatawu Safiu scored for Trelleborgs FF in their 2-2 draw against Vasalunds IF in the Swedish Superettan on Saturday.

Safiu climbed off from the bench in the 33rd minute of the game to help his side seal a vital point at Skytteholms IP Stadium.

After a goalless first-half, Guinea international Mai Traore opened the scoring for Vasalunds in the 55th minute but former Asante Kotoko forward equalised seven minutes later with a fine header from a corner.

Johan Blomberg scored to give Trelleborgs a 2-1 lead in the 70th minute, however, it was short-lived by Kenyan defender Anthony Wambani’s equalizer after three minutes.

The 2-2 draw means Trelleborgs have picked up four points from two matches in the Swedish Superettan as they lie 4th on the league table.