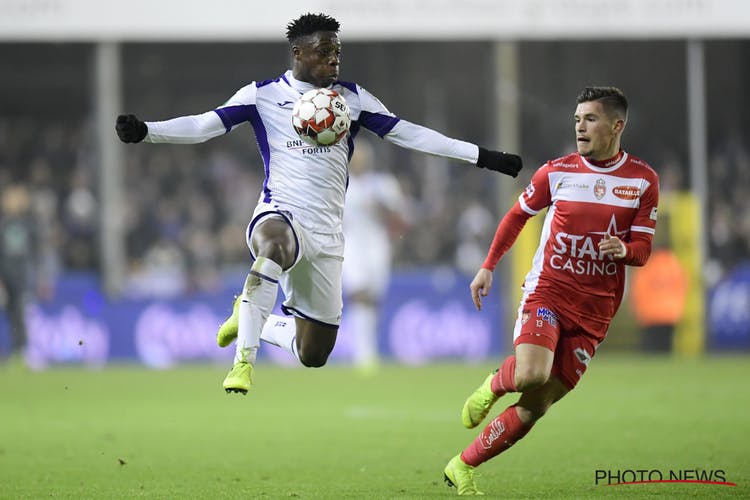 Jérémy Doku, the new prodigy from Anderlecht. Alessio Castro-Montes and Milad Mohammadi had to leave their comfort zone last Friday.

Usually they let the attackers walk behind them, now it was the other way around. The 17-year-old winger makes the progress that is expected of it.

Doku is in the top slider with Frank Vercauteren and Vincent Kompany, who recognize talent when they see it. The winger still has to work on his efficiency, but he is currently one of the most interesting young players on our fields. If this had happened 15 years ago, he was probably not able to get rid of the newspapers. Such as Vincent Kompany and Anthony Vanden Borre. But at the moment nobody is looking up from a 17-year-old more or less in the A-team of Anderlecht .

Yet it is special. He has always had pure speed, which is why he noticed the youth scouts of Anderlecht . Over the years, the use of his body and technique has been added. So now only those decisive actions. With two goals and three assists, it may be a little more for the time he played.

However, he has not only blamed himself on that in recent weeks. He delivered a number of good passes, but his team mates knew little about the goal. Doku is the big gem of Neerpede, even more than Sambi Lokonga or Yari Verschaeren. When Marc Coucke took over Anderlecht , director of education, Jean Kindermans, immediately told him about the speed devil.

Kindermans was afraid that he would leave the club, because earlier Herman Van Holsbeeck had tried to cash him in to attract his striker that he eventually could not make. Besides, it is a talent with a manual, its own will. Not the easiest sometimes, but very self-conscious. He knows his qualities and knows where he wants to go.

If he continues the progress of the last few weeks, it will also be difficult for Anderlecht to keep him. Especially when he starts scoring and giving assists. Because the foreign teams that have been following him for a longer time also have their eyes in their pockets. In one year, its market value has increased sixfold from 1 to 6 million. Although you can assume that Anderlecht only want to sell it for a multiple of that amount.