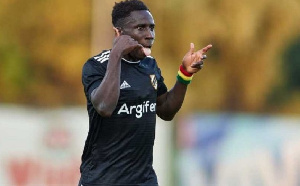 Ghanaian international Samuel Owusu has clarified that his racial abuse did not happen during his playing days in Serbia.

Earlier this week, several reports quoted the Al-Fayha winger for saying that he was racially abused when he was playing for Čukarički in the Serbian top-flight.

With that raising a lot of talking points according to reports from Serbia, Samuel Owusu has been forced to make some additional clarifications.

Speaking in another interview, the exciting forward has explained, "no, no, no! I said they thrown me with eggs and shouted P*** K ***!”.

While stressing that the incidence did not happen in Serbia, Samuel Owusu further indicated that being racially abused is an unpleasant experience and a player needs mental toughness to overcome it.

During his stay with Čukarički, he was one of his team’s best players and helped them to secure qualification to play in the inter-club competition of Europe at the end of the 2018/2020 season.