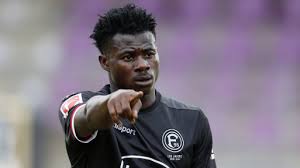 Fortuna Dussledorf youngster Kelvin Ofori made an appearance in his side's 2-2 draw against TSG Hoffenheim in the Bundesliga.

The 18 year old came on in the 66th minute. Dussledorf were 2-1 down at the time. That was his second ever appearance in the Bundesliga.

The Ghanaian played a huge role in his side's comeback. Dussledorf were awarded a penalty in the 76th minute and Rouwen Hennings converted with aplomb.

Rouwen Hennings had earlier put Fortuna Dussledorf in the lead before Munas Dabbur and Steve Zuber turned things around for Hoffenheim with goals of their own.