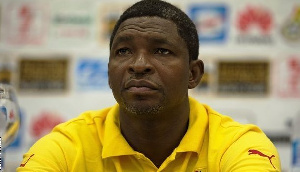 The Chief Executive Officer of Asante Kotoko Nana Yaw Amponsah has disclosed Maxwell Konadu lobbied for him to lead the club.

Amponsah was appointed in 2020 on a three-year deal and has managed to win the Ghana Premier League for the club this season.

During his first season with the club, the former Ghana FA Presidential candidate sacked Maxwell Konadu as head coach of the club after unimpressive performance.

Explaining why the club severed ties with the former Black Stars assistant coach, Nana Yaw Amponsah indicated he is a results-oriented person.

"I'm a results-oriented person and sacking him does not mean I have a problem with him. He was part of people pushing me to be named Asante Kotoko CEO. He lobbied for me to become the CEO”

“He performed well but at a point, we felt we have to let him go. I don't hate him. He is good person but I'm result oriented” he said.

The two-time African Champions emerged as winners of the 2021/22 domestic top-flight campaign, their 25th league title in history.

The Porcupine Warriors will be representing Ghana in the CAF Champions League next season.

Asante Kotoko will play the winner of the MTN FA Cup final in the Ghana FA’s champions of champions.